Reflexology is a therapy that is performed by applying pressure with the thumb and other fingers on feet, hands and/or ears. It takes into consideration your body, mind and spirit. Reflexology works on the 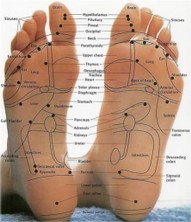 principle that feet mirror the whole body. By applying pressure to reflex points we stimulate a reaction on the corresponding part of the body.

Reflexology is a holistic treatment that helps stimulate the body's self-healing powers in a natural and safe way, helps unblock energy channels, breaks down crystalline residue that form on the nerve endings and has a very relaxing and balancing effect.
After the treatment the therapist will give an advice on after-care. You may experience a healing crisis, especially after the second or third treatment, as your body will react to the treatment. Effects of Reflexology are cumulative and are usually seen after a few sessions, although even in a single session you can have an amazingly relaxing experience.

How do I prepare for reflexology treatment?

Where does reflexology come from?

Because reflexology is an ancient practice, its origin and history is difficult to track. However, reflexology is thought to have been passed down through an oral tradition, and possibly first recorded as a pictograph on the Egyptian tomb of Ankhamor in 2330 BC along with other medical procedures.

Reflexology symbols are also thought to be recorded on the feet of statues of Buddha in India and later China. The Chinese classic, the Yellow Emperor's Classic of Internal Medicine, which was written around 1,000 BC, has a chapter on "Examining Foot Method" and is the beginning of discussions in print about the connection of life force and points and areas on the feet.
It is believed that Marco Polo translated a Chinese massage book into Italian in the 1300s, thus introducing reflexology and massage to Europe. In 1582, a book on an integral element of reflexology called zone therapy was first published in Europe by Dr. Adamus and Dr. A'tatis.
In the United States, William H. Fitzgerald, MD, who is frequently referred to as the father of reflexology, wrote in 1917 about ten vertical zones that extended the length of the body. He found that the application of pressure to a zone that corresponded to the location of an injury could serve as relief of pain during minor surgeries.

Dr. Fitzgerald's work was expanded by Dr. Shelby Riley, who developed a map of horizontal zones going across the body and a detailed map of reflex points on the feet and hands. He also suggested pressure points on the outer ear.

Eunice Ingham, a physiotherapist who worked for Dr. Riley, is another prominent figure in the development of reflexology. In her research with zone therapy's pressure points, she found the feet to be the most sensitive and responsive. She developed the foot maps still in use today and introduced reflexology practices to the non-medical community in the 1930s. Ms. Ingham also designed one of the most commonly used reflexology charts, which has since been refined by her nephew, Dwight Byers, at the International Reflexology Institute.

In 1957, Dr. Paul Nogier recorded a reflex map of points on the outer ear. His work has been expanded by Oleson and Flocco and is now being taught as part of an integrated approach to hand, ear and foot reflexology.

How does reflexology relate to other therapies?

Reflexology and acupressure are both "reflex" therapies in that they work with points on one part of the body to affect other parts of the body. While reflexology uses reflexes that are in an orderly arrangement resembling a shape of the human body on the feet, hands, and outer ears, acupressure uses over 800 reflex points that are found along long thin energy lines called meridians that run the length of the entire body.

Massage: Some people confuse reflexology with massage. While both massage and reflexology use touch, the approaches are very different.
Massage is the systematic manipulation of the soft tissues of the body, using specific techniques (for example, tapping, kneading, stroking, and friction) to relax the muscles.
Reflexology focuses on reflex maps of points and areas of the body in the feet, hands, and ears using unique micromovement techniques such as thumb or finger walking and hook and backup to create a response throughout the body.

In short, massage therapists work "from the outside in," manipulating specific muscle groups or fascia to release tension. Reflexology practitioners see themselves as working "from the inside out" -- stimulating the nervous system to release tension.
Another difference between massage and reflexology is that a client will stay fully clothed for a reflexology session except for removing footwear, whereas clients remove clothing for a massage session.

The basic reflexology course prepares you for helping yourself and your family.

Click here to go online and purchase your class